Compiled primarily from references on Gene Fisher’s excellent website, with input from the GMCnet and other owners.

I claim no ownership of this data, just compiled it in to one document that can easily be printed and handed to a prospective owner.

Other items to look at and/or add: 5

There are maintenance / upgrades that should be made to the GMC before they hit the road the first time.  These are items that will hurt you or let you down. If you read the literature, there are bad stories of coaches burned up, crashed with no brakes, etc. I think we can avoid most of these with good maintenance. This might become a prioritized list of maintenance items.  But some of these are upgrades that do not appear in the shop manual.

2        Tighten your lower ball joints at least every time you grease the front end or your will have a lower control arm failure.

3        If your tires are over 5 years old, you are past the OEM warranty.  Good time to change the tires.  Look on the sidewall for this label

These are going to leave you broken on the road.  This is not to say a broken gear tooth or an errant duck through the radiator will not still get you. Failure of the items above are most likely to happen to you.  (most of them have happened to most of us).

Other items to look at and/or add:

Check the bolts on the upper and lower ball joints at every lube and bearing check.

Check the tip of the lower control arm with a sharp scribe or at least a finger nail looking for cracks. 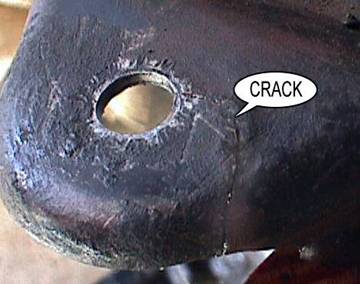 The crack in the control arm shown in the picture could have easily been found this way.  This control arm was from an active GMC and had not yet failed. The GMCMM article Jan99, points out that this procedure will not find hairline cracks. You would need to tear down the suspension and carefully check the area around the hole.

If the bolts will not stay tight, the ball joint should be replaced and possibly drilled out for larger tight bolts. (I am not sure green goop (locktight) will help, but it cannot hurt) 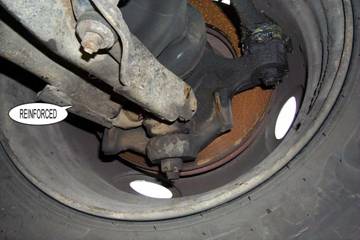 This picture shows the standard reinforcement that GMC provided on the A-frames.  After-market suppliers can provide even more reinforcements.

There is an elbow that will go into the vent hole after removing the vent. You can remove it with a pair of wire cutters by squeezing and lifting. The elbow, GM part number 865-2580 is stocked in so needs to be ordered but its only 3 or 4 bucks. Anyway, press it down into vent hole and attach a 1/4" hose to it.

Oil escapes from this vent if the transmission is over filled, during a catastrophic failure of the transmission and some modes of normal operation.  The oil then drops directly onto the exhaust system and has caused many fires in GMC motor homes.

Wes Caughlan had an article and inexpensive solution for the Trans Vent overflow
problem in the June '98 issue of GMC News. He used 38" of 3/8 "fuel line hose, GM PCV hose # 25508425(for elbows) and vent cap #8460496. Use one of the elbows to attach to vent of transmission, connect with short length of 3/8 copper tube to 3/8 fuel line hose run into aluminum u channel under floor attach vent cap on end. This places the 'vent' out of harms way.

The vent you are looking for is located on top at the front of the transmission. With the engine cover off, if you look down just below the firewall you will see a small metal cap, that is if it is original. This cap is covering the vent tube. This vent is what is replaced with a tube or hose to route transmission fluid away from exhaust and hot parts.  The cap is crimped onto a notched steel tube and can be popped off.  The tube is pressed into the transmission and can be pulled out.  You can attach a molded rubber 90' elbow to the original tube or replace the tube with a threaded fitting.

My vent was extended over to a coolant recovery tank mounted behind the wheel well.  This was to catch the overflow. 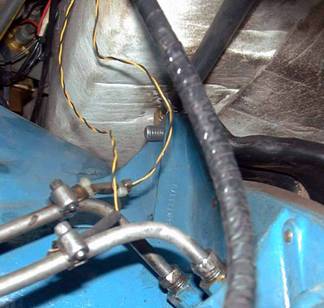 Hard to see but connector has been added 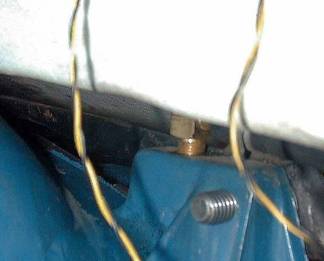 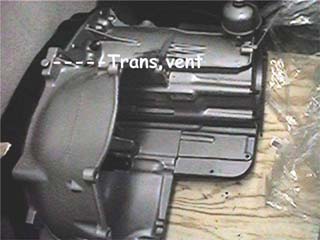 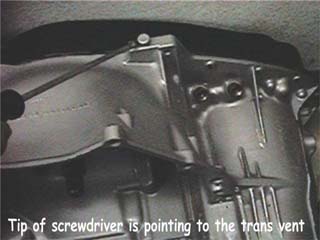 Transmission Vent...Not as easy as it sounded.  Removing the darn OEM vent creates fragments as the vent is equipped with circular barbs which displace transmission case metal in order to retain it.  The vent was free to rotate but was   very resistant to removal until the barbs enlarged the opening in the case.  I cleaned out everything I could find but a transmission fluid change is probably in the near future.

The OEM vent had a machined ring-like hat at its top with a OD of 0.50" but a height of only about .150" or less, far too thin to use with a 1/2" hose.  If one were to grind off the top hat, it would leave a short cylinder stub of about 0.35" diameter, a little small for the 3/8" tubing.  I ended up using 3/8" copper tubing, tapering it to about .350" to wedge into the transmission case hole (~.35" diameter).   It seems secure but I still don't like the idea of the metal bits created by removing the original vent.  Nothing's quite as simple as it first appears.

The question is, should you bypass the mechanical pump altogether, remove it and block off the opening, or can you run the electric pump together with the mechanical?

Most owners leave the mechanical pump on.  It is possible for the diaphragm to leak into the engine with or without the electric pump.  (see the note farther down )*

You can power it from the center terminal of the diode isolator. Good time to test your isolator to see if it is working and if you remove the isolator someday you will have to rewire.

Good time to mount a filter by the electric pump and remove the filter from the input to the Carb.

Use only the best rubber hose.   It has been suggested to use injector hose because it lasts longer.

You can run the electric pump all the time, (and why not ?) one thing less to remember when you are having problems with vapor lock.   Keeping it simple is a good idea. Fewer connections, hoses, components, etc. 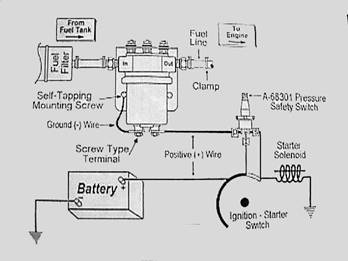 The circuit above will allow the pump to run during cranking or only when there is oil pressure.

This year (2005) there was a suspicion that a bad mechanical gas pump destroyed 3 engines.  The first was the OEM engine, the rebuilt engine used the old pump and lasted only a short while.  The next rebuild also used the same pump and lasted only a short while.  This time it was determined there was a small leak in the diaphragm of the pump which was pumping gas into the crank case.   This does not happen often, but it does happen and may be hard to detect.

Anyone looking for an oil pressure switch that will shut the electric pump off, go to any auto parts store an ask for a oil pressure switch for a 1977 Chevy Vega. This is the one to use and is cheaper then the one from Racing. I don't have the part number. just tell the counter man you want the one for a Vega. Jim Wagner Brook Park.

After checking out the suggestions made, I determined that the pump pressure was too high, 8 1/2 PSI.

Fortunately I did not find the pump that I was after at any of the three parts stores in town. Did some more checking at the pump and found the positive and negative reversed. This turned the pump in the wrong direction. Switched the wires and the gas line hoses and now it works fine. My eyes are no longer what they should be. What I have learned is that the pump puts out more pressure in  reverse   Frank

I mentioned the surging on long grades. Somebody said it might be starving for fuel. I thought I should be able to see that on my fuel/air meters. I left the electric fuel pump off today.Came to a long grade. Stepped on it real good---. When the secondaries kick in the meters go to rich and stay there. Sure enough close to the top the meters went to normal then lean and the lady began to surge. Hit the pump----meters went rich and the surging stopped. It is neat when your toys confirm what you think might be wrong. Arch